Back to certified partners

IBC, a young and dynamic NGO, was initiated by a handful of idealist businessmen, who wanted to provide input in improving the lives of the people suffering, especially the most disadvantaged section of the world population.

The formation of IBC is based on the cooperation that had been established with the United Nations World Food Programme (UNWFP) on April 1999 in Albania. Just after the NATO taking the control of Kosovo, the program was expanded. The insufficient quantity of similar organisations in Turkey was an incentive and encouragement to reach to the decision of a formation that would participate in domestic and international relief operations. Therefore by the inspiration of taking the crescent as a new rising and the blue as the colour of peace and prosperity the decision to establish, International Blue Crescent Relief and Development Foundation had been taken.

Two devastating earthquakes in Kocaeli and in Düzce in 1999 caused a delay in the official procedures of foundation. On the other hand, the already gained experiences on relief activities and international solidarity relationships established during the Kosovo programme enabled the implementation of several relief activities right-away. International Blue Crescent Relief and Development Foundation was officially founded according to Turkish legislations with registration number 4820 on 8 November 2000.

Since more than 20 years, IBC has been working to help in alleviating human sufferings, hunger, illiteracy among all people regardless of nationality, ethnicity, race, colour, social origin, religion, belief, language, political opinion, gender, age, and sexual orientation, genetic and physical features. With the aim and intention to increase its effectiveness internationally, IBC became a member of ICVA International Council of Voluntary Agencies on April 2003. IBC's Special Consultant Status with ECOSOC was approved on July 2006.

International Blue Crescent Relief and Development Foundation (IBC) is certified against the CHS for its humanitarian and development mandates since 2018. 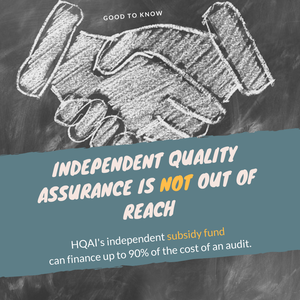 Today, IBC is the only certified partner of HQAI in Turkey and it took us a great amount of time and resources to get there. But we are very pleased with the outcome. This is also reflected in an increase of 7% of funding since our certification. I can only recommend the certification to other organisations. Maybe they can obtain a subsidy from HQAI, like IBC did. Nalan Üker, Programme Director, IBC, October 2019

Nalan Üker talks about IBC's experience, challenges and benefits of their certification journey!